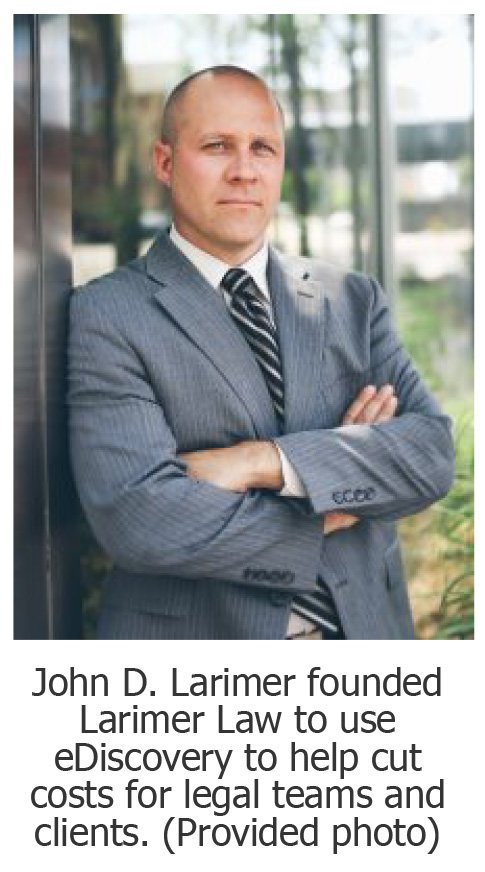 John D. Larimer, the founder and managing attorney of Larimer Law, is not your typical veteran lawyer, set in his ways and content to use what methods have worked before. By his own admission, he tends to get on a roll and begin “geeking out” over the latest technology used in the legal profession.

Larimer’s practice specializes in eDiscovery, which can cut down on the discovery costs for legal team and client alike.

“It’s sort of far afield of where I thought I’d end up when practicing law, not your traditional legal practice. It’s very exciting and, I think, very valuable,” Larimer said recently from his office, located at 1160­E Pittsford Victor Road in Pittsford.

His dedicated team can do discovery work at a much cheaper rate than others — what he calls the “utilization of technology with the help of low­cost labor.”

An example of this work is computer­assisted review, where team members can take a small pile of information and proliferate fresh data through the tools and algorithms provided by the latest software.

“We’re finding that the clients are very interested in our virtual model, where they’ll hire their attorneys to prosecute or defend [a case], but they’ll hire us to work in collaboration with them,” he said. “We’ll work with lots of different attorneys and companies, sometimes in a consulting role.”

The legal world was an early influence in life, thanks to his father, longtime federal judge David G. Larimer.

“My dad is probably the best person to be a judge. He never stops working on cases; he’d always bring his work home on the weekends. Looking back on it now, yeah, I’d say that had some influence on me.”

Larimer graduated from George Washington University’s law school and spent almost a decade in Washington before packing up his family and moving back home to Rochester in 2006. From there, he spent seven years with Bausch + Lomb managing litigation before striking out on his own in 2013.

He cites Richard Susskind’s 2008 work, “The End of Lawyers,” and the proliferation of self­help legal websites such as LegalZoom as inspirations that led him to open his own practice.

“I started talking with the incoming general counsel for Valeant [Pharmaceuticals, who bought Bausch + Lomb in 2013] to see if he was interested in working with me if I was going to start my own practice,” Larimer said. “He got the concept and saw the value, and since I was managing all their litigation at the time anyway, agreed to hand off a portion of that work.

“So it was sort of an experiment at the time, but it’s really gained a lot of traction. It’s validated this idea that there are these services that traditional legal law markets and law firms weren’t really well suited to provide.”

Larimer is looking forward to what’s coming next, as evidenced by his excitement about attending last month’s LegalTech conference in New York City.

“The amount of ways that technology is changing the industry is pretty remarkable,” he said. “Not just the legal industry, you see it everywhere. It’s an interesting time.”

Learn how we can help your
business contain litigation costs.
Get in touch by calling
Larimer Law at 585-851-0340.